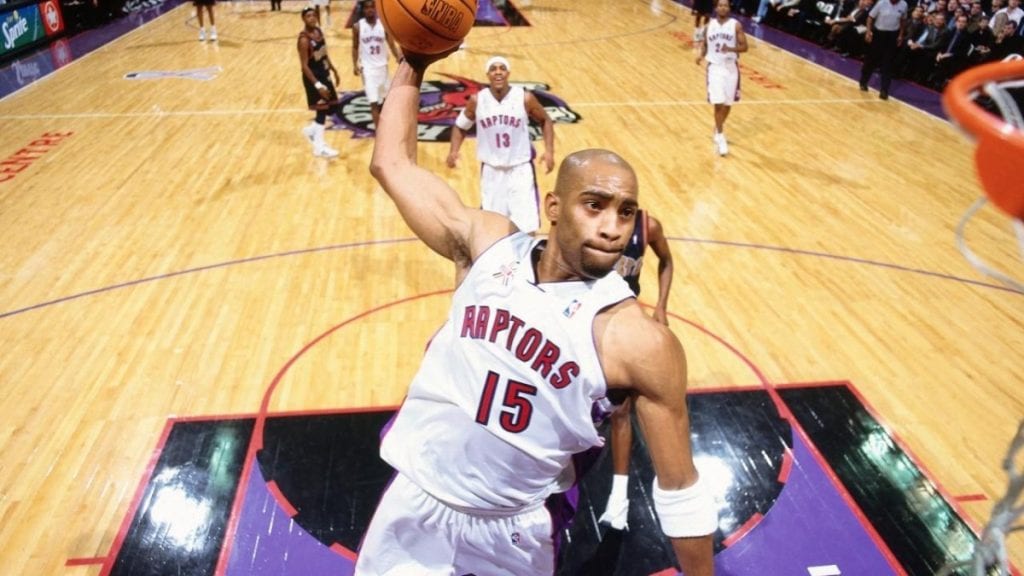 Vincent Lamar Carter, aka Vince Carter, is one of the most exciting basketball players to ever lace up a pair of Nikes. Not only is a he legend on the court, Vince Carter sneakers like the And 1 Tai Chi, PUMA VC, Nike Shox BB4, and others, made him equally as famous in the sneaker game as he as on the hardwood. Throughout his career, in which he became the first player to play in four different decades, Vince Carter was nicknamed ‘Half Man, Half Amazing’ and very seldom did he not live up to that name.

VC wore some of the most iconic Nike sneakers from the ’90s and ’00s, including his signature Nike Shox VC line, the Nike Shox BB4, and others. He won the Slam Dunk Contest wearing the legendary And1 Tai Chi in 2000. And he even had a signature sneaker with PUMA back in the day.

Few players captivated audiences like Vince Carter in his prime. The man known has “Half Man, Half Amazing” was 100% amazing more times than not with his otherworldly slam dunks. Even his most routine jams were leaps and bounds better than most of his contemporaries; but Vince’s game was much more complex than that. The …

Easily the most polarizing technology produced by Nike, Shox makes you feel a certain kind of way just hearing the name. The cushioning setup utilizes multiple columns to distribute energy when an athlete lands and jumps. Energy-efficient foam within the columns offer responsiveness that aims to mimic springs. The on-foot feel of Shox cushioning lands somewhere between Air and vulcanized rubber – more responsive than Air, …

They Don’t make ’em like they used to Ain’t that the truth? In the digital age sneaker ad campaigns have taken a drastic turn. Instagram, Twitter, in-store and websites are the only places consumers visually interact with new product. Previous editions of Wall Space have primarily been wall posters and magazine ads so when you …

With a catalog as deep as Nike Basketball’s, some shoes get lost in the crowd. Technology operates in the same manner. Who remembers Palm Pilots? Not many people, the personal organizer existed in the early years of handheld technologies alongside cell phones. A few years later cell phones would start offering all the benefits of …

It was the year 2000 and it was the Summer Olympic Games in Sydney, Australia. The USA Men’s Olympic team was, how does one say this, stacked. The roster was as follows: Shareef Abdur-Rahim, Ray Allen, Vin Baker, Vince Carter, Kevin Garnett, Tim Hardaway, Allan Houston, Jason Kidd, Antonio Mc Dyess, Alonzo Mourning, Gary Payton, and …

The Dunk Heard Around the World Read More »

On this date (May 11) in 2001, Vince Carter had quite the game. It was game 3 of the Eastern Conference semifinals and his Toronto Raptors were playing the Allen Iverson-led Philadelphia 76ers. It was his time to shine in front of the hometown crowd as the Raptors were able to take 1 of 2 …

This evening will be the 64th NBA All-Star game, capping off the league’s takeover of New York City. Highlights included Steph Curry lighting up the loaded 3-pt contest in his new signature Under Armour Curry One and Zach Lavine bringing down the house with each of his dunks while rocking the Nike Kobe X. There are kids …

Vince Carter was, and still is, the man. You know he’s someone special when he has multiple nicknames; “Vinsanity,” “Air Canada,” and “Half-Man, Half-Amazing.” Another product of the University of North Carolina it is still a wonder how Jordan Brand never snatched him up. Throughout his career he wore a few different brands but he …

If you were lucky enough to live/survive the 90s as a teenager, then And1 and their trash talking t-shirts advertised in the backs of magazines like Slam, were everything. Up until 1993 when And1 was launched, trash talking was reserved for the basketball court. The faceless characters delivered zings like “Do you have a lighter? …

What’s your favorite jersey to wear with your kicks?
Name Manu’s kicks!
Why doesn’t @lukadoncic have a signature shoe?
Jay Z and his court-side kicks.
Tis the season.
Cedrick Ceballos appreciation post.